When Your Big Idea Becomes A Big Project

(Reposted from The THRIVE! Journal Blog, January 29, 2013. This Big Idea was the beginning of the Women of Hope Ministry which today is reaching out locally to women in South Florida and internationally to women in Phnom Penh, Cambodia. Women of Hope will be highlighted at Trinity Church’s Girlfriends Conference 2014, January 17-19, 2014.))

“An idea that is not dangerous is unworthy of being called an idea at all.” -Oscar Wilde

In an earlier blog post, “Daniella’s Big Idea” I wrote about how I became personally involved in the effort to stop sex trafficking through my daughter-in-law’s Big Idea that she initiated one year ago. Daniella’s Big Idea mobilized a number of her friends, local businesses, and members of our congregation. We also became involved with the ongoing efforts of two non-profit organizations already deeply involved: There is H.O.P.E. For Me, Inc. and His House Children’s Home There is Hope for Me, Inc. is an organization of survivors reaching out to help survivors of domestic violence and human trafficking. His House Children’s Home is a faith-based orphanage and foster care agency. We worked together with them over the last year to combine our passion and our Big Ideas to create a Big Project.

Our Big Project connects the efforts of There is Hope for Me, His House, Trinity Church, and our partners to collectively address sex trafficking in South Florida. We have created a grid that describes the current roles and responsibilities of a number of churches, non-profit agencies, and law enforcement agencies. Trinity Church, Peacemakers Family Center (my department), is calling its section of the Big Project “Women of Hope”. Women of Hope provides mentoring, support groups, counseling, access to basic needs, and referral services for victims of sex trafficking sent to us from His House and There is Hope for Me. Both There is Hope for Me and His House work directly with the FBI and local law enforcement agencies when the girls/women are rescued. Women of Hope has also established a hotline and an email address for women and girls who need help to contact us. (Women of Hope Hotline: (727) 379-4673 and email address: trinitywoh@gmail.com)

Twenty women initially volunteered to become Women of Hope mentors. The group began rigorous training in December 2012. Here is a picture taken at one of the trainings:

The first meeting of the mentors and some of the girls happened at the Girlfriends Conference 2013 this past weekend. It was an exciting and emotional time for all of us. We hosted a special luncheon for them and sat with them throughout the conference. Our next step is to begin Women of Hope support groups in mid-February after completing our first mentor training cycle.

In addition to Women of Hope, the Peacemaker Family Center staff managing our Teen Pregnancy Prevention Program, PlanBe__, worked to gain permission from the Miami Dade County Public School System to add a module focused on recognizing and avoiding the dangers of sex trafficking. PlanBe__ is presented year-round in local public high schools, middle schools, and community youth organizations through funding from the U.S. Department of Health and Human Services. Beginning this school year, There is Hope for Me has presented this module alongside Peacemaker Family Center staff. To date, eighteen young adults have requested help. After hearing the presentation, they spoke up and said had been approached by sex traffickers and/or had already been pulled in.

Yes! Eighteen young lives have been helped to escape sex trafficking since August 2012 through our Big Project.

And finally, a very unique Bible study group is starting at There is H.O.P.E. for Me, Inc. A private donor bought copies of THRIVE! for the girls. All 15 girls received their books the day before the Girlfriends Conference 2013. I am praying specifically that THRIVE! will be another tool to assist them as they move into healing, restoration, and a new life.

Creating a Big Project is different than having a Big Idea. I have learned that in order for your Big Idea to become a Big Project, you must be willing to recognize that:

3. Someone knows more than you,

4. Someone is willing to partner with you to make a bigger impact, and

5. Moving slowly and strategically is best.

Do you have a Big Idea that you have been working on for a while? Is it time for it to become a Big Project?

“You really can change the world if you care enough.” -Marian Wright Edelman 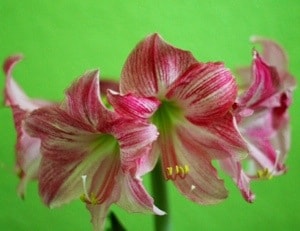 (I photographed this beautiful white amaryllis in my kitchen on December 31, 2013.)