(Reposted from The THRIVE! Journal Blog, November 12, 2012. This Big Idea was the beginning of the Women of Hope Ministry which today is reaching out locally to women in South Florida and internationally to women in Phnom Penh, Cambodia. The mission trip will be highlighted at Trinity Church’s Girlfriends Conference 2014, January 17-19, 2014.)

When I heard this, I sat down and wept. In fact, for days I mourned, fasted, and prayed to the God of heaven. (Nehemiah 1:4 NLT)

Nehemiah had a Big Idea. After hearing about the plight of the people living in Jerusalem, he sat down and wept. He said to himself: “I have to do something.” The Old Testament book of Nehemiah records how he brought his Big Idea to life. My daughter-in-law, Daniella, had a Big Idea. Daniella was born in Venezuela and immigrated to Miami when she was a little girl. She told me that she learned English mainly from watching Sesame Street on PBS. In navigating her new environment, she developed a resiliency and a tenacity that helped her bring her Big Idea to life.

In January 2012, Daniella attended a ministry conference and met Hugo Carballosa from His House Children’s Home
Hugo had an exhibit booth set up to promote His House’s newest ministry The Garden. The Garden, scheduled to open in January 2013, will become the first safe house in the State of Florida for underage girls being rescued from the sex trafficking industry. (Florida ranks #2 in the United States for underage human sex trafficking and yet had no safe house for theses girls.) At the time, His House still needed to raise over $200,000 to open The Garden. Daniella called me before she left the conference and said, “I have to do something.”

Over the next few weeks, Daniella prayed. Eventually, she decided that she would turn her 25th birthday party into a charity event for The Garden. All her guests would be asked to bring a financial donation for The Garden instead of a birthday gift. After meeting with His House, the party date was set for November 10, 2012. Her Big Idea was taking shape.

To build excitement and raise awareness, Daniella organized two Zumba/Hip-Hop Dance classes and invited all her friends. A local choreographer donated his time to teach the classes. While dancing off calories and having fun, her friends learned about the plight of underage girls trapped in the sex trafficking industry.

As her birthday drew nearer, she continued to fast and pray and barter with vendors. In the last two weeks before the event, I visited places with her I didn’t know existed in Miami to get the best prices. She told every vendor what her birthday party was about. Many hadn’t heard about The Garden and did not know about underage sex trafficking in Florida. Many decided to give her a discount.

On Saturday night, November 10, 2012, we enjoyed a fabulous party. We danced and ate great food. We heard the testimony of Katariina Rosenblatt, survivor of underage sex trafficking, and listened to Jean Caceras-Gonzalez, the founder of His House, share her vision for The Garden. It was a wonderful night.

And Daniella’s not finished yet. She and a small group of women are preparing to start a support group for girls and women coming out of the sex trafficking industry at our church with the help of Katariina Rosenblatt and Jean Caceras-Gonzalez.

Do you have a Big Idea? Have you taken any action to bring it to life? If you are willing to share your Big Idea, please send me a reply to this blog post. I would love to hear about it!

“A man may die, nations may rise and fall, but an idea lives on.” -John F. Kennedy 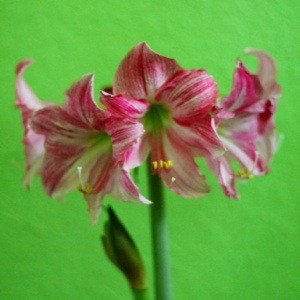 (I photographed this beautiful pink and white amaryllis on December 31, 2013.)