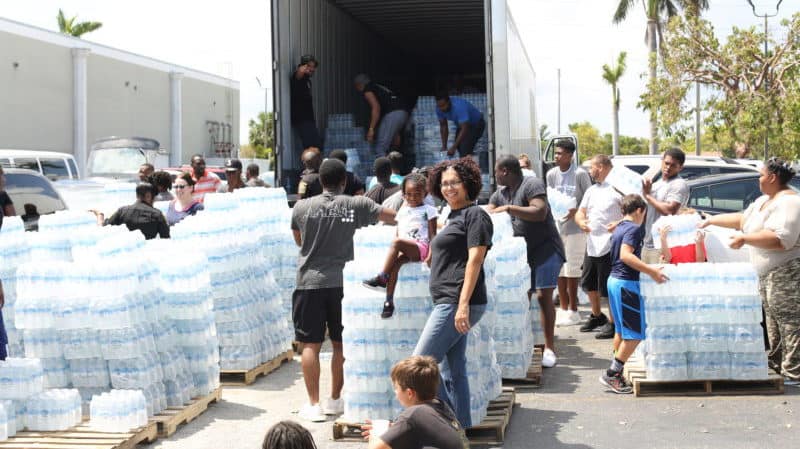 I have lived in South Florida with my family for the last 18 years. We have experienced numerous tropical storms and some hurricanes. Hurricane Irma was different. I remember hearing about it on the radio before Labor Day weekend. Based on the reports, Michele Lozano and I decided we should anchor our beehive boxes to the concrete blocks we had placed them on.

As the days wore on, the news about Hurricane Irma became more and more dire. Irma was being labeled a Category 5 Hurricane. Scientists were calling it the largest hurricane ever recorded in the Atlantic Ocean. By Tuesday, September 5, Governor Rick Scott declared a state emergency for the entire State of Florida. Mandatory evacuations and school closings were set into motion. By Thursday night, our house was boarded up and we had prepared our hurricane supplies as best we could. Store shelves were emptying quickly.  Gas stations were drained of gasoline.

And then, we waited. And waited.

I refused to watch TV weather reports. Newscasters discussions and commentaries added to the overall anxiety of the wait. I switched to checking the National Oceanic and Atmospheric Administration’s Hurricane Irma storm tracking web page. Their map and narrative description of the storm was scientific and without adjectives. The graphic below was one of the updates from Saturday, September 9. Conditions did not look good. Friends and family were calling asking us when we were going to get out of Florida. Plus, news was beginning to trickle in about the devastation Hurricane Irma was causing in the Caribbean. We knew Key West, Florida was next. By Sunday morning, tropical storm conditions began in our neighborhood. It sounded and felt like everything might come apart. Psalm 23 became my mantra. 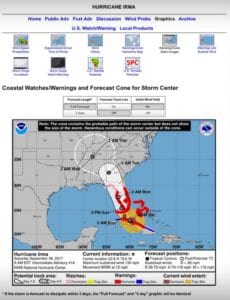 By Monday morning, the sun was out and the skies were clear of any clouds. Our house was intact. We were intact. Some good friends stopped by Trinity Church in Miami Gardens on their way back to the apartment they had evacuated. The church building was fine. The parking lots were filled with downed tree branches, broken trees, and other debris. The urban garden was badly mangled. But miraculously, the honeybee boxes were unscathed.  Here is the picture they sent me: 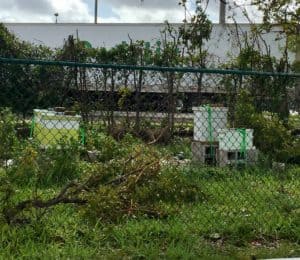 Compared to the terrible circumstances and destruction in the Caribbean and the State of Florida, I know my four honeybee colonies don’t compare, but I felt so happy. When I was able to see them up close, busy gathering nectar and pollen from somewhere in the neighborhood, it was a reassurance that life would go on. 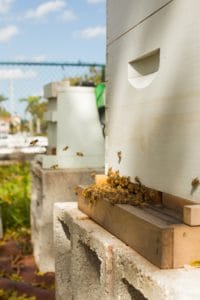 Then on Wednesday, September 13th, Trinity Church received word that Convoy of Hope would be sending three semi-truck load of food, personal care items, and water for distribution to the community. Our staff and servant leaders sprung into action. 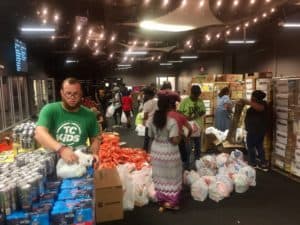 By the next morning, we were ready to distribute what we had received to anyone who would come. In addition to our Trinity Church and Peacemakers staff and Volunteer Florida AmeriCorps Members, we were joined by volunteers from the Miami Dolphins and the Miami Gardens Police Department. Throughout the day, we were able to provide over 1,500 families with a care package and a case of water. It was a beautiful day of coming together in our community. 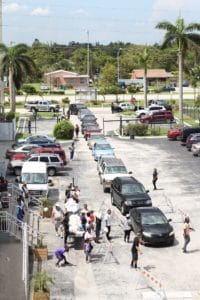 Dolphins Team Up with Church for Food Distribution.